How To Write A Song With Bruce Springsteen. Lyric tricks and a new video from Todd

Hi Everyone!  Thanks for reading my ongoing blog about songwriting!

I'll get to Bruce Springsteen here in a minute...

This is a common deal for me when it comes to songwriting.  I look for "friction & resolve".
While I write, I sometimes stumble along by moaning and groaning and improvising nonsense words and phrases, and a lot of times this will lead me to an interesting line.  I'll admit, this is a tricky method when someone else is in the house.   Sometimes I'll stumble into a word or phrase that is interesting enough for me to build a verse around.  Today's phrase was.

You never looked so good.

I really liked the notion of how I could play around with the meaning of this one simple sentence.
It could be an endearing one.  Or, well, the opposite of that.

On a side note, I don't worry much about grammar and syntax.  The main reason is, most of the time I'm attempting to write from a characters point of view, and, well, the most interesting characters in my head are not too concerned with grammar and syntax, actually, most of them probably wouldn't know what syntax means.  Ha.  Leaving this behind helps free up my mind..  if something is way off, I'll edit a bit. Most songs are a combination of many different characters and people I know or have known.  Sometimes nonsense makes sense depending on the context. (See lyrics in verse 2**)  This one is one of those, although, I didn't think a whole lot about that while writing.  It comes naturally after a while by doing it daily I'm certain.

Okay, so, I have my phrase and I started out by funneling the lyric through time a bit.   I mean, it starts out young, then middle aged, then old.  So, it has a linear that hopefully keeps the listener a bit interested.  I try to make this happen with all songs although I don't always achieve it.  I think every line should move the listener forward somehow.

And here is a trick that moves me through many of my verses.  I think about opposites.

Check out the lyrics to today's song,

I automatically think about the opposite of a word as I'm writing lyrics and it can drive me through a lot of times.  It also creates a friction/irony in the tune that needs to be resolved or, well, leaves me wanting to give the whole thing a positive spin at the end.  See final verse* 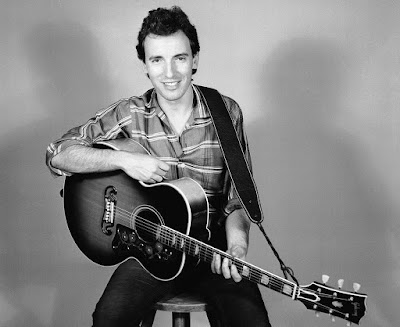 Now, let's talk about working our songwriting muscle with the "Boss"
"Writing with Bruce Springsteen?"

This is an attempt at bringing on new lyric ideas. An attempt at kickstarting something new. A way to go to a place you might not have considered.

Try using opposites as your writing lyrics and see where it takes you.  Try taking a favorite line from a song you love.  I just randomly took Born to Run  (LISTEN ) by Bruce Springteen and with each line of the first verse, blurted out a quick response while thinking loosely about opposites.  My loose responses in no way connect to one another, but this is giving me some lines that I would not have otherwise thought of.  It is a great way to kick start a song!

Sprung from cages out on highway 9,
Trapped in a rage with my dirt track date (ha)

Chrome wheeled, fuel injected,and steppin' out over the line
Rusty wheeled, broken down and slipping up behind the track

h-Oh, Baby this town rips the bones from your back
Damn it to hell, this city puts the meat on the muscle man

It's a death trap, it's a suicide rap
It's life's release, this being "born to please"

Check out all of Todd's tricks for songwriters here.
He talks about using Bowie, George Carlin and many others for songwriting ideas!
www.toddburge.blogspot.com
Posted by toddburge at 11:42 AM

Its really nice blog both for music lovers and song writers and poets.

Thanks Saime, stop by often.

Anonymous said...
This comment has been removed by a blog administrator.
10:14 PM

I really appreciate what you're doing. I think there's a bit more to born to run though. Thanks

Well of course, there a lot more. Volumes more. This is simply an exercise.